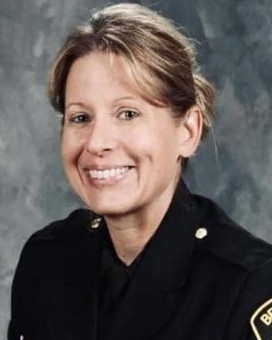 Sergeant Marlene Rittmanic was shot and killed as she and another officer investigated a noise complaint at the Comfort Inn at 1500 Illinois 50.

The officers had responded to the motel at approximately 9:30 pm to investigate reports of barking dogs that were left unattended in a vehicle. They located the room where the vehicle’s owner was staying and contacted the occupants. During the encounter, the occupants attacked and shot both officers. Sergeant Rittmanic and the other officer were transported to a local hospital in serious condition. Sergeant Rittmanic succumbed to her wounds shortly after midnight.

The occupants fled the motel and were arrested approximately 36 hours after a multi-state manhunt.

Sergeant Rittmanic was a U.S Army veteran of the Gulf war and had served with the Bradley Police Department for 14 years. She had previously served with the Iroquois County Sheriff’s Office for seven years. She is survived by her wife, father, five sisters, and one brother.