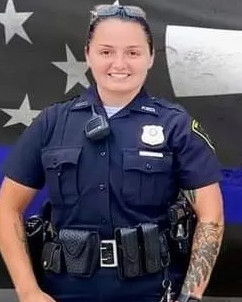 Other officers had requested her assistance to stop a moped being driven by a narcotics suspect in the 200 block of N 12th Street. Officer Burton had deployed her canine partner, Brev, who indicated to the presence of narcotics in the moped. As officers began to search the vehicle, the man pulled out a concealed handgun and opened fire, striking Officer Burton in the head. The man was shot and wounded by other officers before he fled on foot.

He was taken into custody following a brief foot pursuit.

Officer Burton was flown to Miami Valley Hospital where she remained on life support until September 1st. She was taken to a hospice facility on September 3rd and succumbed to her wounds on September 18th, 2022.

Officer Burton had served with the Richmond Police Department for four years. She is survived by her fiancée, mother, and stepmother. Officer Burton was shot nine days before her scheduled wedding date to her fiancée.