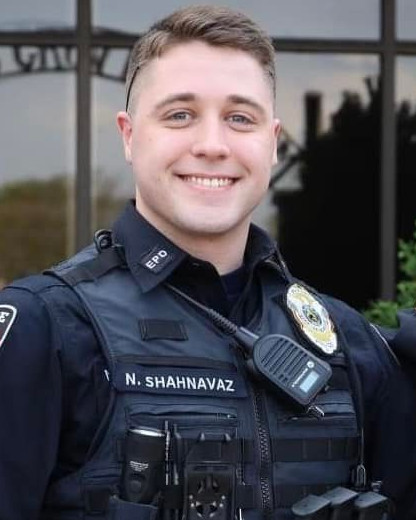 Police Officer Noah Shahnavaz was shot and killed while making a traffic stop near the intersection of Madison Avenue and Route 37 at about 2:00 am.

The driver of the vehicle he stopped exited his car and opened fire on Officer Shahnavaz before fleeing in his car. The man then led other officers on a pursuit after he was located in Hamilton County. The subject continued to fire at officers during the pursuit until officers with the Fishers Police Department conducted a PIT maneuver.

Officer Shahnavaz was transported to a local hospital and then flown to a hospital in Indianapolis where he succumbed to his wounds.

The subject who shot him was a convicted felon who had been previously convicted of shooting at police officers in Indianapolis. He was charged with murder and other charges after murdering Officer Shahnavaz.

Officer Shahnavaz was a U.S. Army veteran and had served with the Elwood Police Department for 11 months. He is survived by his parents, brother, and sister.