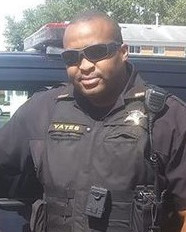 MATTHEW YATES
Deputy Sheriff Matthew Yates was shot and killed while responding to shots fired call at the 1100 block of Ashwood Drive in South Charleston.

At 10:51 am, Clark County Sheriff’s Office received a 911 call reporting that a female subject had broken into a residence and fired five or six shots. When Deputy Yates and another deputy attempted to check the mobile home, they were met with gunfire. Deputy Yates was shot inside the trailer and was trapped inside for hours during the standoff with the subject. Clark County Special Operations and other tactical teams were called to rescue him.

Deputy Yates was flown to the Miami Valley Hospital where he succumbed to his injuries. A second deputy was injured while trying to escape the gunfire.