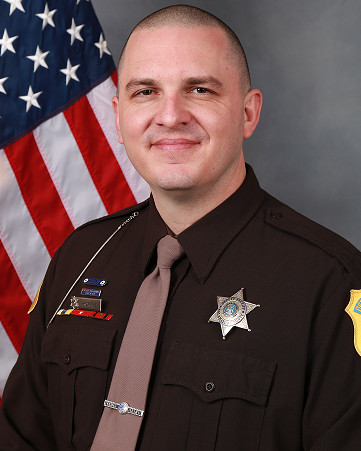 Deputy Sheriff Ryan Proxmire succumbed to a gunshot wound sustained the previous night while involved in a vehicle pursuit.

A subject who had evaded officers in an earlier vehicle pursuit was spotted at a gas station on 35th Street near Galesburg. As deputies approached him, the man produced a gun and fled in his vehicle, prompting a second pursuit. During the second pursuit, the subject started shooting at the pursuing deputies. One of the rounds struck Deputy Proxmire, causing his vehicle to leave the roadway near the intersection of MN Avenue and 38th Street in Charleston Township.

Unaware that Deputy Proxmire had been wounded, the other deputies continued the pursuit for another 4-1/2 miles until the subject’s vehicle became stuck in a field. The man exited his vehicle and again shot at the deputies, who returned fire and killed him.

A passing motorist encountered Deputy Proxmire’s vehicle and called 911. He was transported to a local hospital where he succumbed to his wound the following day.

Deputy Proxmire had served with the Kalamazoo County Sheriff’s Office for nine years. He is survived by his wife, four children, and parents.