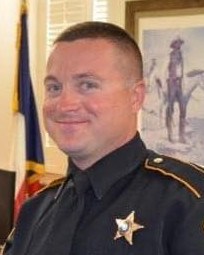 Sergeant Josh Bartlett was shot and killed during a barricade at a home in the 1100 block of 10th Street in Levelland.

Earlier in the morning, the subject had been stopped by a Texas Highway Patrol trooper for reckless driving and attempted to bait the officer into a confrontation. The subject returned home after the encounter and began walking around the neighborhood with a firearm at about 1:15 pm. When officers with the Levelland Police Department arrived, the man opened fire on him and then barricaded himself inside. The regional SWAT team was requested as the man randomly fired shots from the home.

Sergeant Bartlett and three other members of the SWAT team were shot as they engaged the subject. Sergeant Bartlett was transported to Covenant Medical Center in Levelland where he succumbed to his wounds. Several other team members were wounded, one critically.

The subject was taken into custody at about 11:30 pm.

Sergeant Bartlett was a U. S. Army veteran. He is survived by his wife, four sons, parents and a brother.