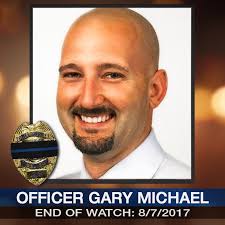 GARY LEE MICHAEL, JR.
Police Officer Gary Michael was shot and killed during a traffic stop in the area of East Green Street and North 2nd Street at approximately 10:45 pm.

The man fled the scene in the vehicle then crashed two blocks away. The subject then fled on foot but was apprehended two days later.

Officer Michael was a U.S Army veteran and had served with the Clinton Police Department for less than one year.