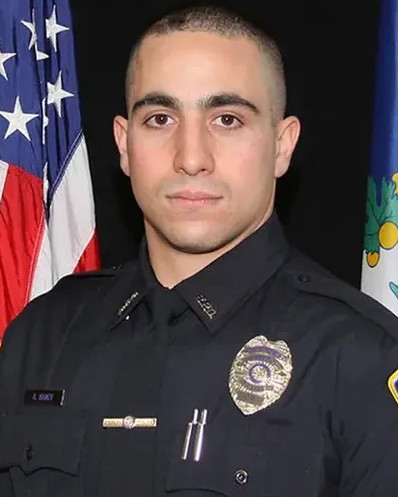 ALEX HAMZY
Police Officer Alex Hamzy and Sergeant Dustin Demonte were shot and killed in an ambush in front of a home on Redstone Hill Road, near Birch Street, at about 11:00 pm.

Officers had responded to a business earlier in the evening in response to complaints about a disorderly patron. Officers who responded to the call issued the man a summons and released him. The man then went home, armed himself with an AR-15 rifle, and made a fake 911 call reporting a disturbance at his home. As officers arrived at the scene the man opened fire on them from the front yard.

Officer Hamzy and Sergeant Demonte were both fatally wounded while a third officer suffered non-life-threatening wounds.

The subject was found dead with a gunshot wound at the home.

Officer Hamzy had served with the Bristol Police Department for eight years. He is survived by his wife, parents, and two sisters.