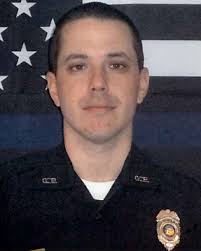 JUSTIN A. LEO
Patrolman Justin Leo was shot and killed while responding to a domestic disturbance call at 408 Indiana Avenue at approximately 10:15 pm.

The subject was intoxicated and was known to have firearms inside the home. Responding officers made contact with the subject, who produced a handgun and shot Patrolman Leo. Another officer returned fire and killed the subject.

Patrolman Leo was transported to a local hospital where he succumbed to his wounds.