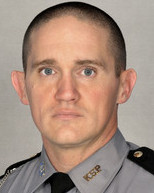 Chief Deputy Jody Cash was shot and killed in front of the Marshall County Sheriff’s Office at 52 Judicial Drive in Benton at 2:10 pm.

He was escorting a prisoner when the man shot him. The prisoner was also shot and killed during the incident. Chief Deputy Cash was taken to a local hospital, where he succumbed to his wounds.