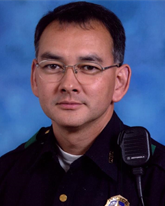 Sergeant Smith was a U.S. Army veteran and had served with the Dallas Police Department for 27 years. He is survived by his wife and two daughters.