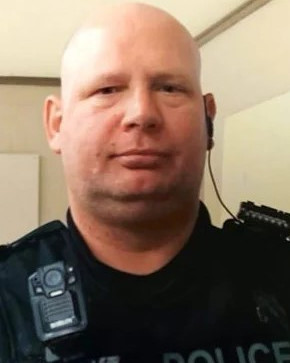 DONALD SCOBY
Sergeant Donald Scoby was shot and killed while pursuing a subject who fled from a traffic stop.

Sergeant Scoby attempted to stop the subject’s vehicle at about 11:00 pm, but the man fled, and a vehicle pursuit ensued. The man abandoned his vehicle in the area of Reiger Road and S Yoder Road and fled on foot, with Sergeant Scoby chasing him. He shot Sergeant Scoby during the foot pursuit.

The subject barricaded himself in a home. He was killed during an exchange of gunfire with responding SWAT officers. Another officer was wounded during the shootout.

Sergeant Scoby had served with the Stuttgart Police Department for four years.