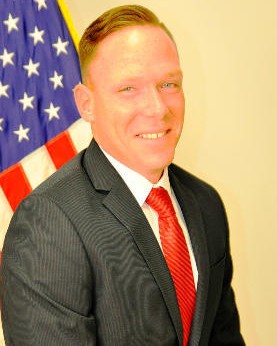 MICHAEL R. DOTY
Detective Michael Doty succumbed to gunshot wounds sustained the previous day while searching for a subject who had shot a York County Sheriff’s canine handler earlier in the night.

Deputies had originally responded to a domestic disturbance at which a man had attacked his wife before fleeing into a wooded area near his home. The man ambushed a canine officer who was attempting to locate him, wounding him. The subject also shot a law enforcement helicopter that was assisting with the search.

Following the wounding of the canine officer, a SWAT team responded to the scene to continue searching for the man in the 1400 block of South Parham Road.

The man set up a second ambush, wounding Detective Doty and two other members of the SWAT team before being shot and wounded.

Detective Doty was flown to a hospital in Charlotte, North Carolina, where he died the following day.

On May 22, 2018, to avoid the death penalty, the 47-year-old suspect pleaded guilty to murder, attempted murder, and several other charges. He was sentenced to life without the possibility of parole.