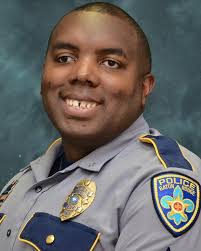 MONTRELL LYLE JACKSON
Corporal Montrell Jackson, Police Officer Matthew Gerald, and Deputy Sheriff Brad Garafola, of the East Baton Rouge Parish Sheriff’s Office, were shot and killed by a subject outside of a convenience store at 9611 Airline Highway shortly before 9:00 am.

Officers had received reports of a subject walking along the roadway carrying a rifle. As responding officers arrived in the area they were ambushed by the subject. Deputy Garafola, Corporal Jackson, and Officer Gerald were killed and three other officers were wounded, including one who was critically wounded.

Corporal Jackson had served with the Baton Rouge Police Department for 10 years. He is survived by his wife and infant son.