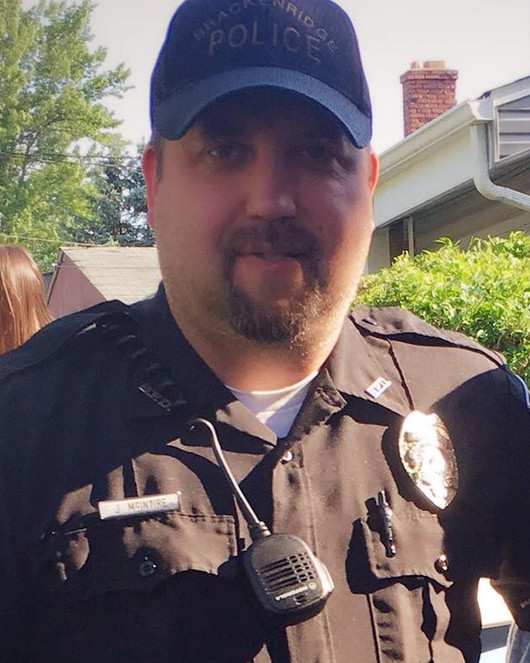 JUSTIN MCINTIRE
Chief of Police Justin McIntire was shot and killed near the intersection of Brackenridge Avenue and Morgan Street during a foot pursuit of a wanted subject.

The man was wanted for a probation violation involving weapons and had fled from the Pennsylvania State Police during a traffic stop the previous night. He then fled on foot from Harrison Township the following morning during a traffic stop. At about 2:00 pm he was located near the border of Brackenridge Borough and Tarentum Borough and led officers on a foot pursuit for over two hours. He opened fire on officers in the 900 block of Brackenridge Avenue and again in the 800 block of 3rd Avenue in which Chief McIntire was killed and a Tarentum Borough officer was wounded.

After shooting both officers the man carjacked a vehicle and fled into the city of Pittsburgh. He fled into a wooded area following a vehicle pursuit and then opened fire on officers. He was shot and killed by return fire.

Chief McIntire had been sworn in as police chief of the Brackenridge Borough Police Department exactly four years earlier.